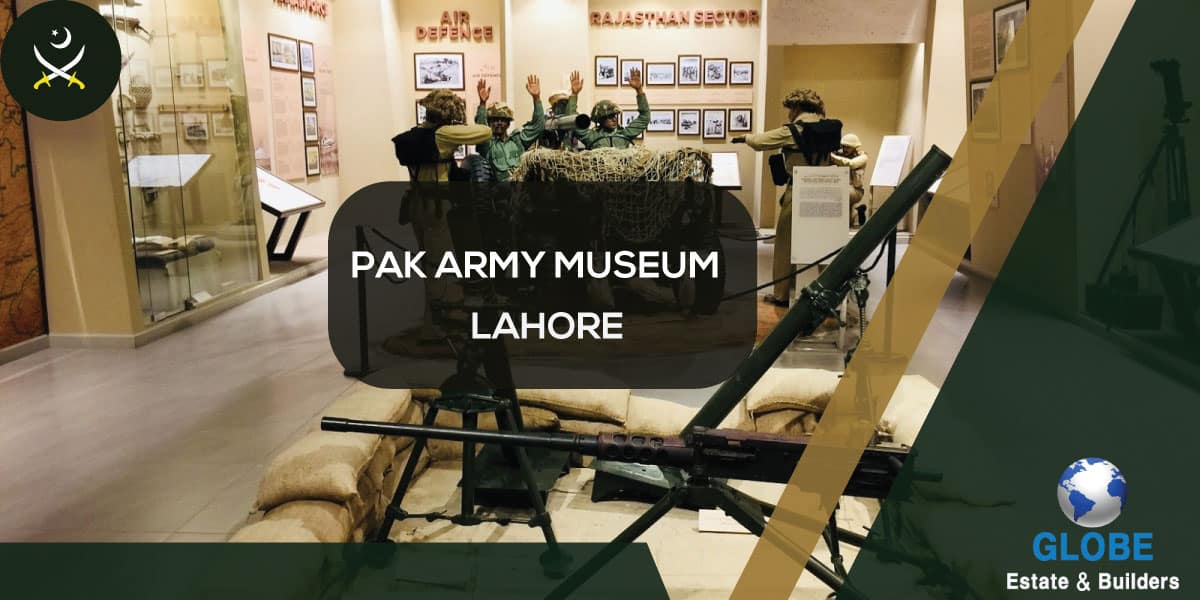 The Army Museum in Lahore is the second of its kind in the country after pretty old one at Rawalpindi, and has celebrated its first anniversary a few months ago, located a little short of the way to the new Lahore Airport over very spacious territory.

Inauguration of Army Museum In Lahore

It was inaugurated on 13 August 2017 by General Qamar Javed Bajwa, Chief of Army Staff (COAS), and was opened after a month to the general public.

The Army Museum is a successful and much-wanted complement to existing museums already located in the regional metropolitan area. The large area around the newly formed Army Museum’s currently covered area will provide the management with enough room for its expansion and further growth in the years to come.

A Walk Through Army Museum In Lahore

Here is a complete guide on the galleries in Army Museum.

So, let’s get started!

The Reminiscence Of The War Of September 1965

The first thing to see as you pass through the reception counter is four captured Indian tanks. Among these, three were captured in September 1965 in one of the biggest tank battles fought in Chowinda near Sialkot and the fourth was captured during the 1971 war with India. A brief history of the encounters that captured these Indian tanks is also given for the visitors details. Stairs were also given to enable visitors to climb over each of these tanks particularly the young ones and girls.

There are a number of huge slabs on both sides immediately after entering the museum, on which the names of a large number of Shuhda-e-Pakistan are etched from 1047 when Pakistan came into existence until 2016 of the Pakistan Army’s officers and jawans who sacrificed their lives in the defense of their mother in the Wars with India and in the ongoing war against terrorists, extremists and others. There are a number of slabs vacant for updating Shuhda-e-Pakistan ‘s ever-growing list from time to time. Very clearly, it is time consuming to grave the names of our brave and courageous soil daughters.

Before moving on to different galleries, on the left side, you can see a map showing the Army Structure while providing information about the Pakistan Army ‘s main wings etc.

Busts Of Chiefs Of Army Staffs Till Date

Busts of the Commander-in-Chiefs and Chiefs of Army Staff of the Pakistan Army from 1947 till now remain on the right side just opposite the Army Structure. It is a well-known fact that two British Generals led the Pakistan Army in Sir Frank Masservy and Sir Douglas David Gracy until early 1951, when General Muhammad Ayub Khan was entrusted with the command of the army as the first Muslim commander-in-chief of Pakistan.

There is some open area between the bust of General Raheel Sharif and General Qamar Javed Bajwa to place on the bust of the army chiefs who will retire when their tenures are finished and their successors take over the command of the army accordingly.

Information On War Animals Used In Past Years

Prior to entering the numerous galleries on the left or right, you can see in motion along with their riders in the lounge life-sized sculptures of war elephants and war horses, and brief history offers information as to when these were used.

Rebirth of a Nation

On the right side, the Rebirth of a Nation gallery, you can see life-size portraits of the Quaid-e-Azam while addressing Pakistan’s Constituent Assembly in August 1947, while Lord Mountbatten was sitting next to him. Mohtarma Fatima Jinnah and Lady Mountbatten are seen sitting in the visitor’s gallery.

There are portraits, names and brief descriptions of members of the Pakistan Movement who, under the visionary leadership of Father of the Quaid-e-Azam Nation Muhammad Ali Jinnah, had played very significant and important roles in the development of Pakistan.

Gallery About Cessation Of East Pakistan

Next gallery offers pictorial material on Indian interferences and skirmish that led to the cessation of East Pakistan in December 1971 and to Bangladesh.

A massive map shows the position of a number of Mukti Bahini Training Centers in India for which these camps were raised. Where about one lakh of armed personnel was trained by the Indian Army before they were taken to East Pakistan in the garb of Mukti Bahini as if they were locals to carry on the slaughter of Pakistanis committed to patriots and not ready to say or even hear a single word.

A burning train of Muslims migrating to their newly established motherland was attacked by armed Hindus and Sikhs and rescued by jawans of the Baluch Regiment, whose mere presence was sufficient to force the runway of attackers.

And a very fascinating feature of the Army Museum is the show of various facets of the long war against terror of years. So, tourists will walk through a relatively long gallery in a zig zag fashion to provide information about different operations all along. This has also been carried out by the Pakistan Army in Federally-Administered Tribal Areas (FATA), which is in the process of being combined with Khyber Pakhtunkhwa province, and other terrorists have targeted areas in the country along with victories so far achieved.

And targets for which ongoing Operation Raddul Fassad was launched in order to remove terrorists, insurgents and extremists in all their manifestations.

Photos of large number of young students and their teachers martyred in the December 2014 terrorist attacks on the Peshawar Army Public School that culminated in the National Action Plan being unanimously established. To the tourists these are a source of inspiration and remembrance that this is our fight for survival. As well as maintaining and safeguarding the unity and welfare of Pakistan and Pakistan Armed Forces Officers and Jawans, Law Enforcement Agencies, Rangers and Police continue to lay down their lives to attain these cherished goals. With the continuing blessings of Almighty Allah, they will be effective with dedication and devotion in the war on terror.

So, when you decide to visit Army Museum in Lahore after this COVID-19 pandemic curve flats down, must have this guide by your side to make your friends and family astonish by your vast knowledge.

A Guide To Property Transfer Procedure In Bahria Town