Everything You Need To Know About Islamic New Year Hijri 1442 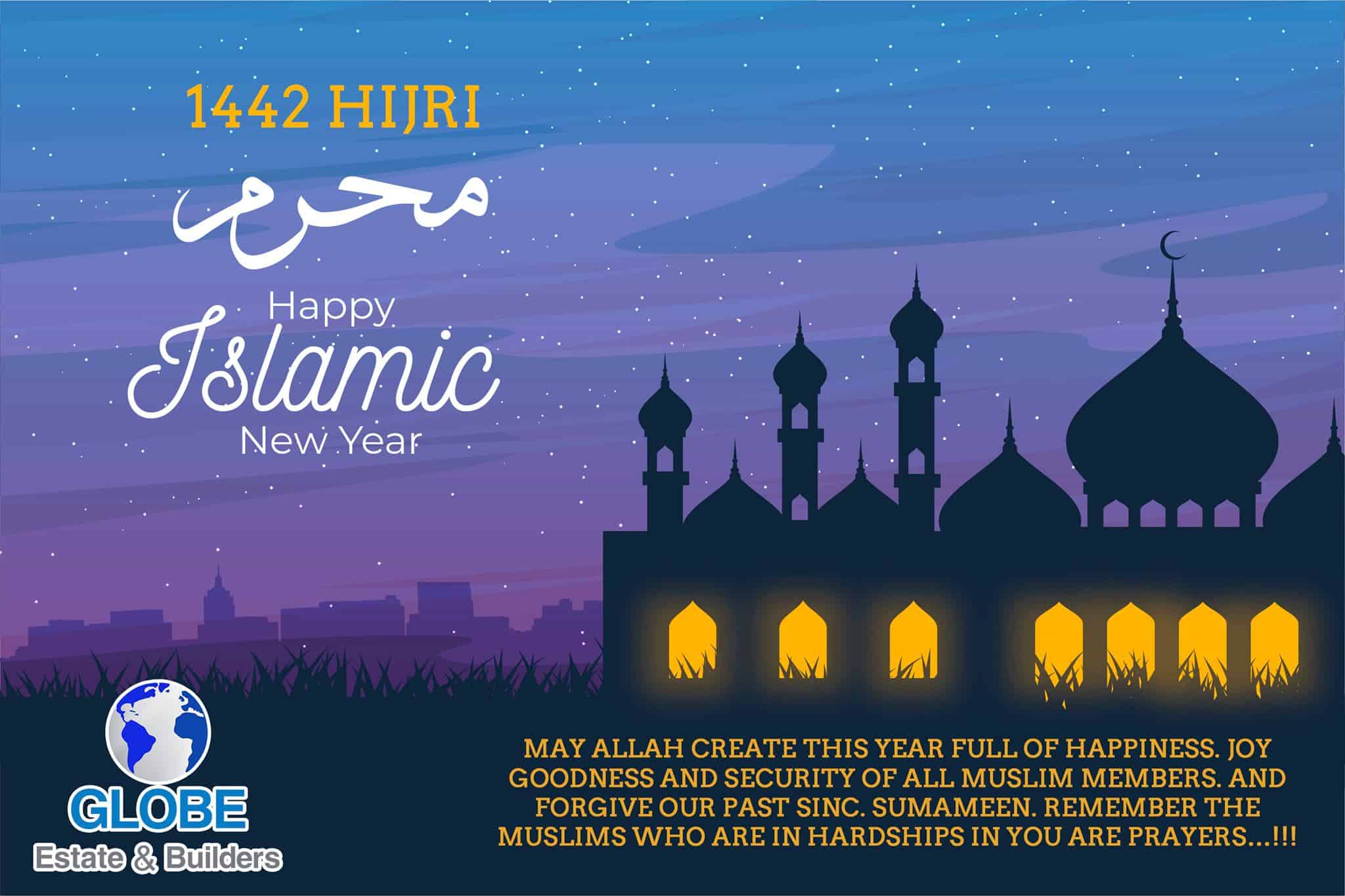 The Islamic New Year Hijri 1442 And The COVID-19 Pandemic

Muslims across the globe are celebrating their day of New Year on Muharram’s first day of the month. This year is the Islamic New Year Hijri 1442.

It is a significant month as it marks Prophet Muhammed ‘s migration from Mecca to Medina. And this is also one of the Islamic Lunar calendar’s holiest months. Give these wishes, messages, and salutations to your friends and loved ones on this holy day.

Both the Common Era (CE) and the Al-Hijrah (AH) have much to record this year that later generations would wonder how has mankind coped with so many calamities? Calamities which were never seen in modern times!

“And (remember) when the disbelievers plotted against you (O Muhammad SAW) to imprison you, or to kill you, or to get you out (from your home, i.e. Makkah); they were plotting and Allah too was planning, and Allah is the Best of the planners.” (8:30)

Depending on the Moon’s sighting, Al Hijri 1442 will fall in Pakistan on August 21, 2020, marking Muharram’s first day. The word Muharram means ‘not permitted’ or ‘prohibited’ so Muslims are prohibited to take part in practices such as fighting and use it as a time of prayer and reflection.

It is considered a ‘sunnah’ to observe a fast on this day after Prophet Muhammad held a roza on this day after Prophet Musa or Moses according to the Sunni tradition. Shia Muslims, on the other hand, refrain from attending and celebrating all the joyous events of this period and observe the fast on Muharram ‘s tenth day, commemorating the martyrdom of Imam Hussain, son of Hazrat Ali, and the grandson of Prophet Muhammad.

“O Allah, bring this [month or year] upon us with security, Iman, safety, Islam, your pleasure and protection from Satan”.

The Islamic calendar is composed of 12 months that are identical to the Gregorian calendar. But, unlike the 365-366 days of the daily calendar, it consists of 354-355 days.

The Islamic New Year ends with Muharram and then with Safar, Rabbi al-awwal, Rabbi al-thani, Jumada al-awwal, Jumada al-thani, Rajab, Shaban, Ramadan, Shawwal, Dhul Qadah and Dhul Hijjah. That month is, in its own way, meaningful. Four of these months are regarded as extremely sacred. So much so, it is prohibited to wage war or any act of aggression during these four months.

“The year is of twelve months, out of which four months are sacred: Three are in succession Dhul-Qa’ da, Dhul-Hijjah and Muharram, and (the fourth is) Rajab…”

The Month Of Muharram

New Year’s Hijri ends at Muharram. The Muharram 9th and 10th are collectively known as the Ashura Years. The 10th of Muharram carries significance for both Muslims and Jews because it is the day that Allah (SWT) rescued Prophet Musa (Because) and his men from the army of the Pharaoh. In addition, this month’s incident at Karbala also took place. Hence it is considered sacred this month.

The Month Of Ramadan

Ramadan is considered one of the most blessed months in Islam, and is the 9th month of the Islamic Calendar. This month is full of celebration and festivity as the Muslims get absorbed in reading the Quran and Duas and spending their optimum time doing Dhikr.

The Muslims fast the entire month as it shows them the true meaning of patience and perseverance. Not only are Muslims expected to refrain from eating and drinking within the stipulated period during this month but they are also required to curb all negative emotions including frustration and prove to be the ideal Muslim. The Islamic celebration of Eid ul Fitr culminates in this month of Ibadah. In fact, the Quran was also completed in this month.

The Islamic lunar year’s last month is Dhul Hijjah. Muslims from around the world visit the House of Allah (SWT), the Holy Kaaba, this month for the annual pilgrimage; Hajj. Muslims celebrate Eid ul Adha after performing Hajj which marks the perfect end to the year.

The Reality of Hijrah

Hijrah is not a story telling of Rasoolullah SAS. It is a traumatic feeling that leaves the comfort zone and in this case, it was Makkah the most blessed land of Allah SWT.

Hijrah leaves this most cherished land of Allah SWT for the sake of Allah SWT. Hijrah is the nobility of intention and target over the place’s aristocracy. How hard it must have been to leave Makkah with the Ka’bah for Rasoolullah SAS to learn that he would never be able to make it his home again.

Prior to the Hijri Calendar

Until Islam, the Arabs did not have a calendar and this was one of the requirements to create a civilization. Islam has brought modern culture to existence. In fact, the Arabs used to remember the year through a big event such as “The Elephant’s Year” or “The Ka’abah Rebuilding Year.” Yet they didn’t have a structured schedule like we do today. Yet finally, with the emergence of Islam, Muslims became known to the entire world and a new culture was born.

Beginning of the Islamic Calendar

This launched the Hijri calendar in 638 C.E. / 17 AH No other than Umar Ibn Al-Khattaab (RA) of the Second Khalifah There was a desperate need to provide a calendar to record its history now that the Muslim Ummah was completely formed. There were several different approaches and activities proposed but the case of The Hijrah was agreed unanimously after much consideration and consultation.

The Sacred Month Muharram & Its Importance

Muharram is considered the most sacred month in Islam, after Ramadan, and it marks the beginning of the lunar calendar that follows Islam. Like the 365-day Gregorian calendar, the Islamic calendar has about 354 days, divided into 12 months. The first month of the Islamic calendar is Muharram, followed by Safar, Rabi-al-Thani, Jumada al-Awwal, Jumada ath-Thaniyah, Rajab, Shaban, Ramadan, Shawwal, Zu al-Qadah and Zu al-Hijjah.

The Islamic New Year, also known as Al Hijri or Arabic New Year, is celebrated on Muharram’s first day as it was during this holy month that Prophet Muhammad migrated to Medina from Mecca. Yet Shia Muslims mourn the 10th day of the month, known as Ashura, in the memory of Prophet Muhammad ‘s grandson, Hussain Ibn Ali’s martyrdom.

Wanting to show the same appreciation to God to his disciples, Prophet Muhammad agreed to observe a two-day fast-one on Ashura Day and the day before that is Muharram’s 9th and 10th Day. Those are the traditional Sunni Muslim practices.

The Shia community remembers the 10th-day massacre, Ashura, in which Imam Hussain was said to be beheaded in the Karbala war. The leaders of the Shia community put on black clothing, observe abstinence, fast and carry out processions on this day to mark public mourning, and remember the pain offered to their great leader and his relatives.

The 9th and 10th of Muharram are observed as gazette holidays in Pakistan. This year, it will be observed on August 29 and 30, 2020.

The Islamic New Year Hijri 1442 And The COVID-19 Pandemic

What can we tell about the events that led to the first Muharram 1442? We reach 1442 AH with a pandemic that is still wreaking havoc in the world mowing hundreds of thousands of lives along its course and leaving tens of millions infected by Coronavirus known as the COVID-19.

Like other religions, it influences the way we do our congregational Salaah for Muslims, how we would welcome each other and how we would have our social activities. It affects how we say goodbye to love, how we pray Salaatul Janaazah, and how Muslims, on the whole, were unable to perform Hajj and Umrah except for a handful of pilgrims chosen in 2020.

In conclusion, in our New Hijri Year 1442, the reminder we have is that we cannot allow evil to triumph over good, injustice over justice, hate over love, and internment over freedom. The year 1442/2020 these problems sound much louder and clearer over several new years Hijri. This pandemic teaches modesty to all. He has taught Muslims how we can still reach out with Islam’s message even in a crisis. It would be and always would be our celebration of this Hijri New Year.

Saving In Bank Vs Investment In Properties

Exploring Some Of The Best Societies In Pakistan