6th September Defence Day – The Pride Of Our Nation

Every year, Defence Day is celebrated in memory of the sacrifices the Pakistani armed forces made in the war of 1965. 6 September (Defence Day) is one of the most significant events in the history of Pakistan.

On 6 September 1965, without a formal declaration of war, the Indian army crossed Pakistan’s international frontiers. It was a time when not only our brave soldiers but the entire nation was thrown into the mold of a cohesive unit to defend our homeland, defeating the Indian Army and pulling them back on every front.

The Detailed Background Behind 6th September

On September 6, 1965, the enemy invaded our borders with a view to breaching the assaulted areas. It’s been a response to stopping Pakistani military advance in India Occupied Kashmir. They were mostly targeting the Lahore, Sialkot, and Sindh desert areas. The war continued until 22 September 1965, when both sides agreed ceasefire supervised by the United Nations.

The War in Kashmir

Events in Kashmir came to a climax, too. Indian Prime Minister Lal Bahadur Shastri added more fuel to the fire by taking measures to further integrate Kashmir into India’s political body and claiming that the Kashmir question occupied a secondary position in effective India-Pakistan relations.

The application to the Kashmir State of Articles 356 and 357 of the Indian Constitution, which allowed the President of India to create and legislate the Presidential Rule in Kashmir, made an attempt to amalgamate Kashmir into the Indian Union altogether.

At 3:00 AM on September 6, 1965, Indians crossed the international frontier of West Pakistan without a formal declaration of war and launched a three-pronged offensive against Lahore, Sialkot, and Rajasthan. On the Punjab plains, there has been a fierce tank battle. The Indo-Pak dispute at home turned into an international war and raised questions about Super Strength.

Under the auspices of the United Nations, the main diplomatic attempt to stop the fighting was carried out and a truce came into effect on 23 September 1965.

The Inevitable Defence By Our Military 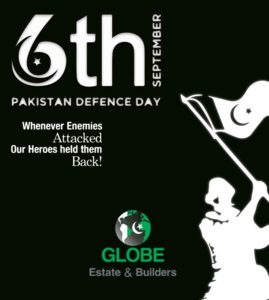 of thousands of civilians and their homes. As such, we owe an obligation to honor and support all of our country’s military personnel who sacrificed their lives so that we, our families, and our fellow countrymen may live in peace. It should also extend this appreciation and gratitude to all those military personnel who helped our martyrs, sacrificed their lives, and lived to tell the story.

Martyrs Of The Defence Day

Many of our national martyred heroes won decorations for their gallantry and courage. Major Raja Aziz Bhatti was awarded the highest Nishan-i-Haider military award for his extraordinary role in defending the Lahore Bedian region in 1965. He is among a handful of other gallant and courageous military personnel who have been martyred and in other battles and wars given the same honour. In Pakistan’s defence they gave the greatest sacrifice of their lives.

Defence Day is also a day to renew our pledge that we are a powerful, proud country, and that no foreign power, no matter how strong it is, can bully us. Our troops are a sign of all that and much more. It represents the Pakistani great nation’s fighting spirit, courage, and tactical acumen. And Defence Day is the day for celebrating and remembering all that so we can be strong and send the right message to the country’s youth and children.

How Defence Day Is Celebrated Today

Throughout the nation, a number of military parades and activities are arranged on Defence Day. The latest innovations and advancements in modern tactics are seen in military parades as well. Often on this day, test launches of newly designed weapons occur as well. The obvious purpose of these activities is to celebrate our veterans and to highlight our military strength. Our TV channels and social media are also playing their part in that goal.

By going to specific places everybody is able to watch such functions live. These shows are seen on national television channels too. National songs, special documentaries about 6 September 1965, and the stories of those who were martyred that day are seen on television. The details are told about how people sacrificed their lives for the country’s safety and what the burden lies with the younger generation, the children who are Pakistan’s future

The change of guard ceremony takes place at Mazar-e-Quaid, Karachi, where Pakistan Air Force Academy cadets present and take command of the Guard of Honor.

The Role Of Military In Our Country

We should all be proud of our powerful armed forces and their constitutional role in protecting our country’s physical frontiers and defence. We may face economic challenges but we are secured from external threats by what many around the world consider to be one of Asia’s strongest military powers. We pay homage to their sacrifices, as we honor our former war heroes.

But our military not only engages in warfare but also contributes in peacetime to the country. In disaster-hit countries, the powers most frequently carry out humanitarian operations and provide national relief services in situations such as floods, earthquakes, etc. Many of the institutions of the armed forces, such as their schools, universities, hospitals, etc., which operate under military control, often provide vital services to civilians.

As of the September 1965 war with India, Pakistan emerged as a powerful and self-confident country, proud of itself and its military forces. It was a nation united in the face of India’s threat. For war success, national unity and complete support for the armed forces in the field are necessary. With the help of the government, Pakistan’s Armed Forces repelled India’s naked aggression across the international border and making it pay a price by taking four times more territory than India and forcing it to accept a truce, return to the negotiating table and vacate each other’s territory. It was definitely their finest hour of glory, and a day for future generations to recall the soldiers and civilians of that time.

Each and every Pakistani has this spirit of brotherhood in their hearts, if you dare to hurt one of us, we will all stand together as one country, for we have no predicament of caste, no color of faith among us, we are brothers and sisters standing together as one, under one flag, and when we stand together we can teach you a lesson that you will surely never forget.

How We Can Make The Events Of 1965 Memorable

Honoring and saluting our national heroes is never tardy. At any time, any school or community event can be arranged to recognize all those uniformed men and women who have served to protect our country. We, too, should raise awareness of their significance and activities on social media. Our discussions and talks with family and friends may also include the subject of the military’s significance and constitutional position.

If that gives young people motivated to join the military and serve the country selflessly, it will be a good outcome.

Muharram 2020: Significance, History & Virtues Of Fasting On The Day Of Ashura

How To Buy A Plot In Pakistan: A Guide For First Time Buyers