Pakistan To Build The World’s Largest Salt Refinery In Balochistan 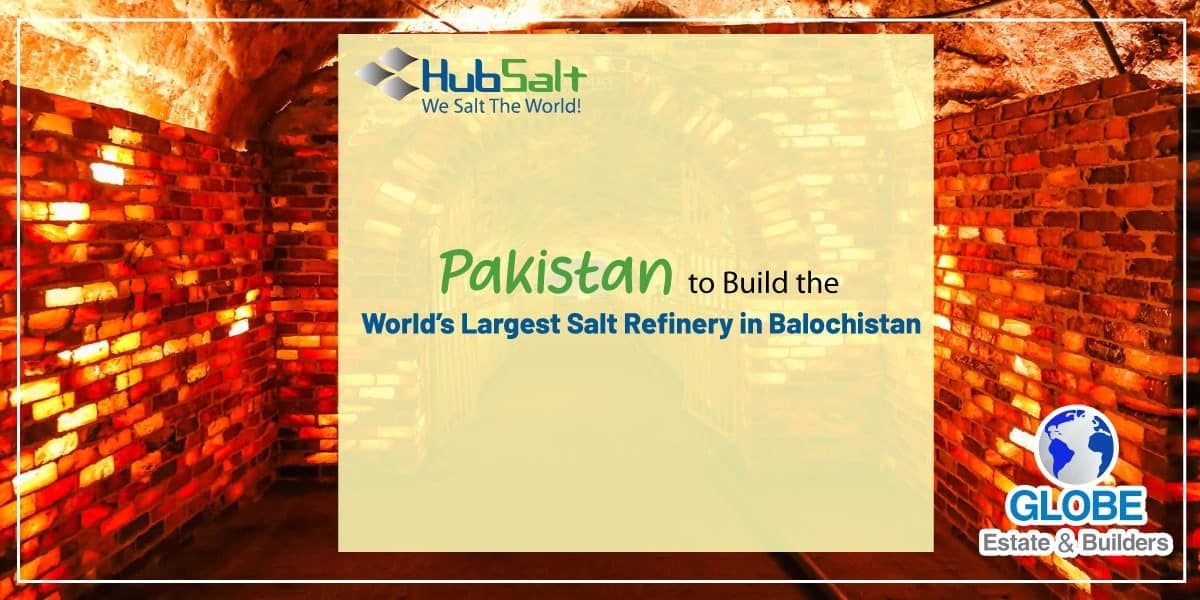 According to officials at the Hub Pak Salt Refinery, a new salt refinery to be set up in an industrial zone in southern Pakistan will be the world’s largest refinery in size and make Pakistan the third largest salt processor on the globe.

Today, on the west coast of Mexico’s Baja California Peninsula, the world’s biggest salt-making factory is near Guerrero Negro. It occupies 86,500 acres of land and extracts 10 million tons of salt a year, providing commercial use for nine percent of the world’s salt.

Pakistan, which has the second-largest global salt reserves in the world, only supplies four million tonnes of the world’s total salt or around 300 million tons.

Business Development Opportunities With The Construction Of Salt Refinery

Hub Pak Salt Refinery, a private company, plans to improve this and is setting up its plant in the Hub Industrial Zone of Balochistan, near Karachi, on 150,000 acres of land. It is anticipated that the plant, officials said, will begin development in 2023.

He added that the planned facility will make Pakistan the third largest salt producer in the world and the second-largest exporter, adding that the country would be able to export more than one billion dollars worth of salt or four percent of its overall exports.

Actually, Pakistani salt’s primary destinations are the United States, Europe, the UAE, Australia, Japan, South Korea, and Africa, where it is used in the clothing, apparel, and chemical industries.

Pakistan has two main salt extraction sources. The first is the second-largest salt mine in the world, the Khewra Salt Mine, situated in the province of Punjab and the primary producer of pink Himalayan salt.

The second source is saline lakes, landlocked bodies of water which have a slightly higher concentration of salts and other dissolved minerals than most lakes.

In this part of Pakistan [Sindh province], there are 170 salt lakes that contain industrial-grade salts… Suttar, whose company operates two salt lake plants in remote areas of Sindh province, about 300 kilometers from Karachi, said more than for our local requirements.

The largest salt refinery worldwide is currently based in Mexico, which occupies an area of over 86,500 acres and produces 10 million tonnes of salt annually.

Hub Pak Salt Refinery will expand to a staggering area of more than 150,000 acres, as per the data, and is scheduled to be operational in 2023. The refinery will make Pakistan the world’s second-largest salt exporter and the third-largest distribution processor.

The CEO of Hub Pak Salt Refinery, Ismail Sattar, has announced that the overall cost of the refinery would be over $350 million. Upon its completion, the scheme would also hire up to 2000 people.

Pakistan only manages to export 400,000 tonnes annually while producing up to 4 million tonnes, while having the world’s second-largest revenue reserves.

The annual production of salt will grow to 30 million tonnes once the Hub Pak salt refinery is operational, and the nation will gain up to 1 billion per year.

As mentioned earlier, Pakistan has two major salt sources: the Khewra Salt Mine and the saline lakes.

The annual production of the two lakes alone is about half a million tonnes.

Tariq Mehmood Satti, an operations manager at the Mokhai Salt lake processing facility, said It is a gradual process as the rainwater floods into the lake and it takes about three to six months before it gets ready for the harvest.” “The raw salt collected is poured on the side of the lake from where it is transported to the manufacturing and packaging manufacturing facility.”

About 800 locals are employed throughout the harvesting season, while 70 others remain employed at the plant during the year, Satti said.

Ismail Suttar, who is also the president of the Employers Federation of Pakistan, said the planned salt refinery in the industrial zone of the Baluchistan Hub will provide more than 2,000 people with work opportunities after its completion.

For the latest property news, subscribe to our newsletter.